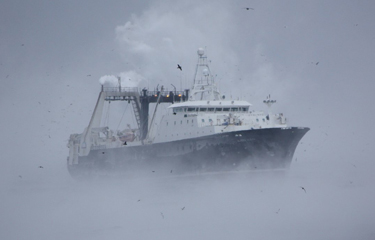 A fleet of U.S. fishing vessels has become the second to achieve the Fairness, Integrity, Safety, and Health (FISH) Standard for Crew certification, a move seen as a major step in recognizing the importance of labor standards in the seafood sector. industry.

The 14 processors of Alaska pollock and Pacific whiting catches are operated by the American companies American Seafoods, Arctic Storm, Coastal Villages, Glacier Fish and Trident Seafoods, which operate collectively as the At-sea Processors Association ( APA). It is the second group to achieve FISH Standard for Crew certification, after Nueva Pescanova’s Namibian subsidiary, NovaNam, received certification for its 11 fishing vessels in July 2022.

“Our employees are at the heart of our operations,” said Jim Johnson, President and CEO of Glacier Fish Company. “We all have a responsibility to ensure that crew members are treated with the utmost fairness at every stage of the recruitment and employment process. We are proud to have voluntarily committed to this additional level of scrutiny, which should give buyers and consumers continued confidence that we are doing the right thing for the men and women who produce our seafood. »

FISH Standard for Crew is a third-party accredited global certification program launched in 2021, which ensures that working practices on certified wild capture fishing vessels employ ethical working practices and provide appropriate treatment to crew. The highest level of the standard includes adherence to four main principles: socially responsible working practices and ethical behaviors, establishing fair conditions of service for all fishers, ensuring safety and health of all fishermen, and the provision of decent housing, water, and food.

The FISH audit process includes vessel inspections; private interviews with crews; a review of the company’s recruitment practices, payroll records and grievance logs; a review of corporate security protocols; and a review of company operations relating to crew welfare.

“FISH is a tool that fishers like APA can use to demonstrate to its customers and stakeholders that their seafood is harvested from responsible sources with respect to crew treatment, compensation and working conditions. board,” said FISH Board Chairman Fridrik Fridriksson. in a press release.

APA’s executive director, Stephanie Madsen, said her organization was pursuing certification to assure customers that its employees were treated fairly and to ensure that the group’s processes met the high standards set by the certification.

“Retailers and foodservice operators are increasingly committed to providing their consumers with seafood that is not only environmentally sustainable, but socially responsible. The third-party assurance that comes with FISH certification gives buyers and consumers confidence that the crews who harvest seafood like that of the APA catch-processor fleet are treated with respect and fairness,” Madsen said. “We are very proud to be among the first to obtain FISH certification, a recognition that confirms our companies’ long-standing commitments to the safety and responsible treatment of our crews. The FISH certification process was challenging, yet practical and fair, and challenged our fleet to improve on our already high standards. »

Madsen said she expects the labor standards movement to continue to grow in the seafood industry.

“There is a lot of momentum right now – from governments, industry and civil society – to tackle cases of unethical treatment of workers in supply chains. global supplies. We believe the FISH standard for crews can be an important tool in these efforts when it comes to seafood,” she said. “With this certification, we are proud to help raise the bar of what should be expected globally from those who operate fishing vessels.”

The At-sea Processors Association’s director of sustainability and public affairs, Matt Tinning, told SeafoodSource that there is growing receptivity in the business community to audited labor standards that examine how businesses operate from seafood.

“Eco-certifications such as the Marine Stewardship Council have been around for decades, but the idea of ​​a third-party ship labor certification program is new,” Tinning said. “There is no silver bullet when it comes to crew welfare globally, but a credible third-party certification program has significant potential to shake things up. For those in the fishing industry who want to demonstrate they are doing the right thing – and challenge others in the global industry to do better – FISH Crew has the potential to be a powerful tool.

Although the Marine Stewardship Council and other seafood certifications have made efforts to pursue their own labor standards, Tinning said FISH certification has its own value.

“Eco-certifications are complicated and their standards are multifaceted. It is appropriate and preferable that those with specific expertise in the welfare of crews on fishing vessels lead this issue,” he said.

Tinning responded to criticism leveled at the FISH standard by some members of the Seafood Task Force – a collection of 28 non-governmental organizations, including Greenpeace and the Environmental Justice Foundation, that the FISH standard presents “significant weaknesses in design, application and monitoring.”

“Nothing alone will solve the labor problem. It’s going to take an array of tools. And hopefully over time a wide range of stakeholders will see this as an important tool,” Tinning said. “When a new program like this emerges, and when industry gets involved, it’s not entirely surprising that there is some skepticism. But I firmly believe that the FISH Crew Standard will demonstrate its value by driving positive change over time.

National Fisheries Institute vice president of communications Gavin Gibbons praised the APA for achieving FISH certification and criticized those who questioned the importance of certification.

“What are Greenpeace USA and its friends doing about labor issues in the seafood community? Complain about them. Meanwhile, a transparent, independent and verifiable standard is in place and functioning and certifying fisheries, including one of the largest and most important in the world,” said Gibbons. “While a group of well-heeled NGOs are wringing their hands, others are rolling up their sleeves.”

Photo courtesy of the Association of Offshore Processors