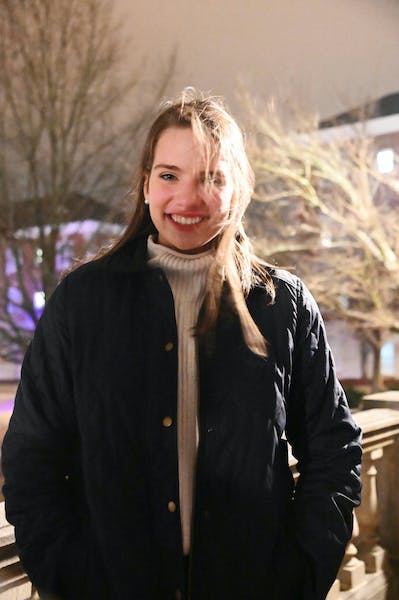 The SGA Elections Council announced Anne Earthman as the next Miss Auburn late Friday night on the steps of Cater Hall. Earthman, a public relations junior, won Friday’s election with 2,977 votes, 35.7% of all votes cast.

After heading up the stairs, Earthman hugged current Miss Auburn Caroline Keim and posed for photos with Auburn’s newest class of senior SGA officials, still smiling from the announcement.

“I feel shocked,” Earthman said. “But so, so honored, and I look forward to the privilege of serving in this role.”

As Miss Auburn, Earthman said she plans to make “tangible and practical changes” to the university, hoping to leave Auburn better than it is now. She spearheaded a campaign to improve accessibility on campus for students with disabilities and expand the University’s mental health programs and began speaking with students about their experience.

“Hearing people come up to me and talk about their experiences with accessibility on the Auburn campus has been nothing short of amazing,” Earthman said.

Earthman said running her campaign was a growing process and found herself asking for support from her team, led by Kaleigh Phillips, her campaign manager.

Get The Plainsman straight to your inbox.

“I was there for Anne just as a friend, but also trying to organize everyone and see where they liked to help out in the campaign,” said Phillips, a sophomore in business administration. “It was important to us that everyone had fun, and the goal was just for people to make new friends and learn to love each other and Auburn as best they could, but that’s for them.”

Keim, who is finishing her term as Miss Auburn this semester, said she feels the job is in her best hands with Earthman.

“I think [Miss Auburn] is a position that has such a great voice, but it’s not always taken advantage of, and I know that [Earthman’s] going to build on that,” Keim said.

Keim, who is currently looking forward to “retirement”, said the night was bittersweet and offered some advice to Earthman.

“It’s going to come and go so, so fast, but remember… to say yes to every opportunity you can say yes to, to absorb it,” Keim said. “But also know that you’ll be standing here in my place in a heartbeat, and it’ll be gone so fast, but just to enjoy it.” She’s just gonna fall in love with Auburn more than she ever dreamed.

“Thank you all,” Earthman said. “I really can’t appreciate it anymore, and I can’t wait to be your Miss Auburn.”

The election committee sanctioned Earthman 115 votes for a violation of election regulations, details of which have not been posted on the SGA website at the time of publication.

Do you like this story? The Plainsman does not accept money from tuition or registration fees, and we do not charge subscription fees. But you can donate to support The Plainsman.