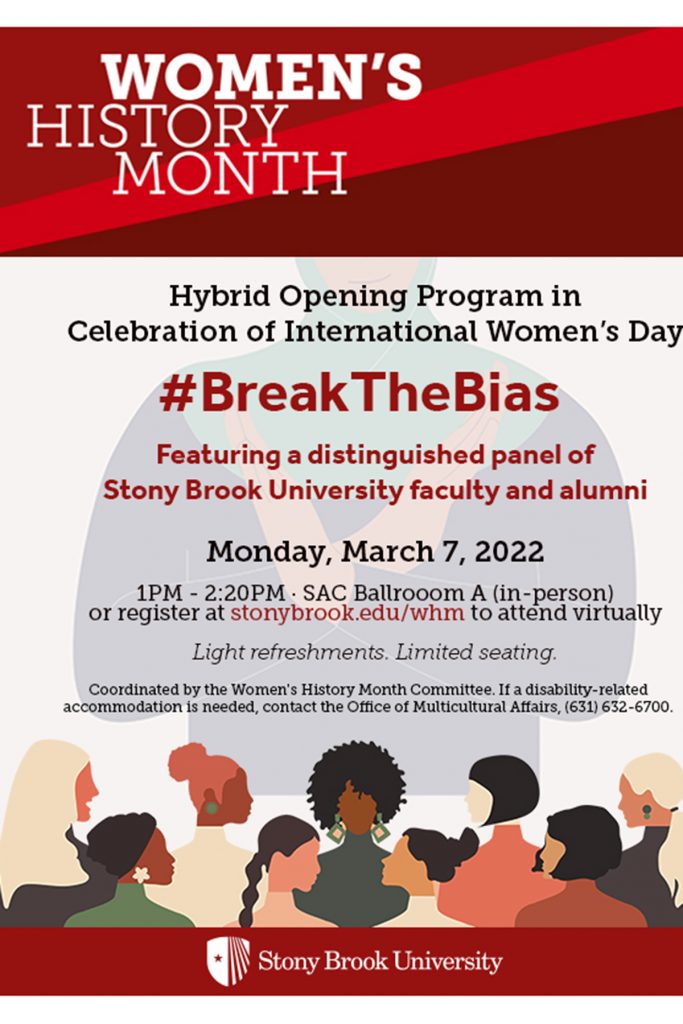 The university one “Hybrid Opening Program on International Women’s Day” will take place on Monday, March 7 at 1 p.m. ET in Ballroom A of the Student Activity Center with limited seating, and will also be accessible on Zoom. This year’s program will feature a discussion of the issues facing women with three accomplished SBU alumni – Maureen Ahmed ’11, Stephanie Baez ’08 and Brooke Ellison ’12.

The program will be moderated by Senior Cassandra Skolnick, a student member of the Women’s History Month Committee who specializes in women’s, gender and sexuality studies. Additionally, student moderators will be Amber Lewis, a junior journalism student; Minors in Music and Gender and Women’s Sexuality Studies and Sanjana Thahura, a Biology major with specialization in Interdisciplinary Biology, Undergraduate College Academy Minor in Health and Wellness. Participants can Register online to watch the opening ceremony on Zoom.

Here are the events planned for Women’s History Month:

Girl Power in STEM: “Break Down Prejudice!” is a symposium to celebrate the achievements of women in the fields of science, technology, engineering and mathematics (STEM). Speakers and panelists will engage our attendees in thought-provoking discussions and panels on how we can all challenge the status quo and support female leaders in STEM fields in an ever-changing world. Participants can register at https://www.eventbrite.com/e/girl-power-in-stem-break-the-bias-tickets-254593174037

How is access to social spaces linked to the social construction of gender and sexual identities? How does in situ signage taken as a signifier offer a look at societal ethics and cultural ethos? What are the institutional investments in law enforcement bodies and the application of cis-heteronormativity? And what can queering space (and spatiality) offer in terms of a future conception of “something else”? This conference takes debates around gendered public toilets as a starting point to consider the biopolitics of space, conceptions of power and knowledge, and the generative links between spatial equity and social justice.

Monday, March 28 (between 3 and 5 p.m. ET), “Closing Program to Celebrate International Women’s Day” in Ballroom A of the Student Activity Center with limited seating.

For more than a decade, At Tanzina Vega (’96) career as a journalist focused on inequality in the United States through the lens of race and gender. She was a reporter and producer for The New York Times and CNN, where her work spanned text, digital and broadcast television. She recently spent three years as the first weekday Latina host of “The Takeaway” on WNYC, New York Public Radio. Tanzina has covered many of the most significant news events of the past decade, including several presidential elections, the COVID 19 pandemic, the rise of #BlackLivesMatter, Puerto Rico’s political crisis and the January 6 Capitol uprising. . In 2019, she received the Robert G. McGruder Distinguished Lecture and Award from Kent State University. Previously, she was a Fellow of the Nation Institute and Ferris Professor of Journalism at Princeton University. She is a distinguished graduate of the Craig Newmark School of Journalism at the City University of New York, where she earned a master’s degree in digital journalism. She lives with her son in New York.

Stony Brook University goes far beyond the expectations of today’s public universities. With nearly 27,000 students, 2,800 faculty members, more than 200,000 alumni, an academic medical center and 18 NCAA Division I athletic programs, it is one of four campuses at the center college in the State University of New York (SUNY) system. The university embraces its mission to provide the highest quality comprehensive undergraduate, graduate, and professional education, and has been ranked among the top 25 public universities in the nation by Forbes. Fostering a commitment to academic research and intellectual endeavours, Stony Brook’s membership in the Association of American Universities (AAU) places it among the top 66 research institutions in North America. The university’s distinguished faculty have won prestigious awards such as the Nobel Prize, Pulitzer Prize, Indianapolis Prize for Animal Conservation, Abel Prize, and the first Breakthrough Prize in Mathematics. Stony Brook is responsible for co-managing Brookhaven National Laboratory for the US Department of Energy – one of eight universities with a role in running a national laboratory. Providing economic growth to nearby communities and the wider geographic region, the university totals an impressive $7.23 billion in increased economic output on Long Island. Follow us on Facebook (https://www.facebook.com/stonybrooku/ ) and Twitter(@stonybrooku).