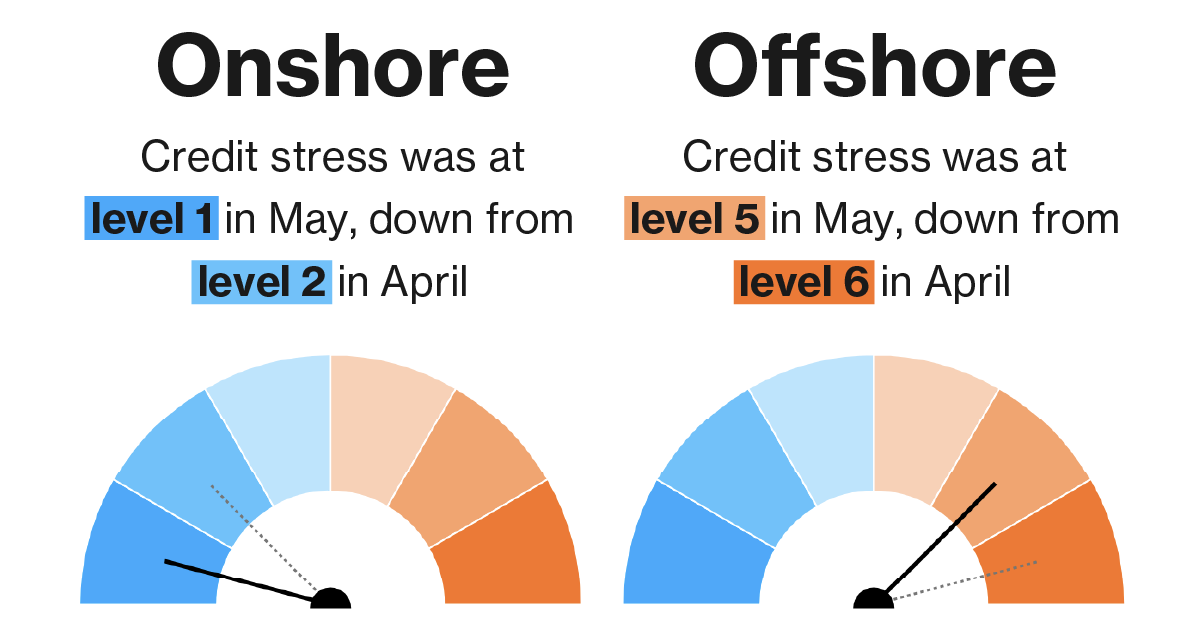 China’s $12.3 trillion local credit market is proving more resilient than its offshore counterpart to a historic property sector crackdown and a record wave of defaults.

Domestic stress eased to a low on Bloomberg’s China Credit Tracker in May, deviating further from the high scores seen overseas. Average spreads on riskier AA-rated local bonds over respective government notes that month tightened to their tightest level since at least 2011.

This contrasts sharply with the much smaller offshore bond market where beleaguered developers have driven a historic $18 billion in defaults, five times more than for local debt.

Maintaining calm in China’s domestic market is a priority for the authorities as they roll out an ambitious campaign to reduce financial risk and limit moral hazard. Policymakers need to strike the right balance: allowing more failed payments is necessary to debunk assumptions that the state will rescue borrowers, but too much stress could trigger contagion and systemic risk for the wider market. The economic costs of the country’s strict Covid-zero policy will add to the challenge.

China is counting on a stable government bond market to raise much-needed public funds, even as foreign investors – who own more than 10% of China’s sovereign debt market – sell the notes in the longest streak of outflows since 2015. Citic Securities Co. expects local authorities to sell at least 1.5 trillion yuan ($225 billion) this month alone to help pay for additional fiscal stimulus needed to support the economy. Chinese banks are the main buyers of government debt.

So far, stress in the indebted real estate sector has been largely contained in the offshore market, even after high-profile defaults at giants like China Evergrande Group and Kaisa Group Holdings Ltd. That’s partly because global investors have absorbed most of the losses as borrowers prioritize payments or seek extensions over their local bonds, even when they don’t repay their dollar debt.

This has kept local corporate bond market returns positive for 21 of the past 24 months, even as Chinese junk bonds recorded their ninth straight month of losses in May.

After more than a year of protracted difficulties for developers, policymakers have stepped up efforts to ease the credit crunch by cutting key interest rates and reviving tools that mitigate credit risk. The sale of new local credit-secured bonds by a small cohort of builders is one such method.

While default insurance guarantees are ‘tokenistic’ in that they only cover part of the principal, ‘we believe the government has also made provision for securities companies to provide protection’ , according to S&P Global Ratings analysts, including Wilson Ling. This is another sign that Beijing is focused on building trust.

Such moves have so far disappointed investors, but the resilience of China’s local bond market over the past two years could attract more global buyers. A recent move to make it easier for foreigners to access corporate bonds through the foreign exchange market may signal a drive to encourage more foreign capital, although this currently represents only a very small portion of buyers.