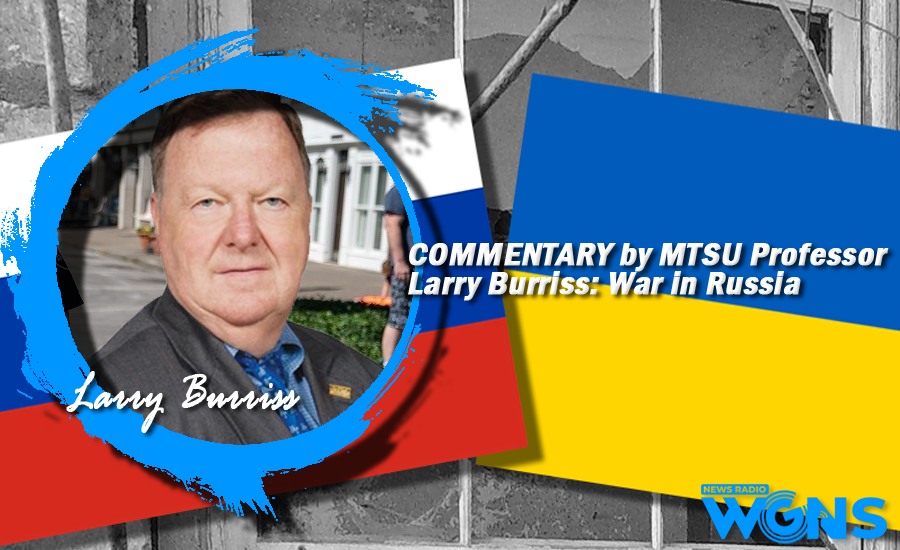 In this commentary, Larry Burriss, a journalism professor at MTSU, talks about the media and war concerns in the Russia region…

Scroll down to learn more about Dr. Larry Burriss…

Verbatim from Above Audio: “The mental gymnastics kick in as both sides to the Ukrainian conflict spin texts and photographs to prove their side is right and it is just. But of course it’s the media that actually manage the various perceptions we face.

But it also seems that concerns about war as spectator sport are more part of the discussion than ever. But again, perception just doesn’t match reality.

During the Civil War, there was a very real fear of Confederate forces attacking and occupying the nation’s capital. And how did people learn of the impending attack? Thanks to a new technology called the telegraph.

But then, once people heard the news, a strange thing happened: Citizens of all kinds, including politicians, took to rooftops and hills to watch the Battle of Bull Run.

And as they ate their picnics, they saw and learned that battles may seem heroic and sanitary in news reports, sagas and songs, but the reality was very different.

In fact, governments found the images of battle so disturbing that they began to take steps to distance the horrors of war from the general public, and even from the politicians ultimately responsible for continuing wars.

Thus, realistic news from the battlefields of World War I and World War II were kept away from the public. In fact, it took about 18 months after Pearl Harbor for the photos to finally be made public.

Jump to Viet Nam and relatively new developments in broadcasting have brought warfare into our living rooms. As people dined, images of body bags and flag-draped coffins flickered on their television screens.

At the turn of the last century, real combat felt like a video game as laser-guided weapons raced across computer screens to silently explode in a vision-enhanced green cloud. Without a body in sight.

So, as we watch the new images of war appear on mainstream and social media, perhaps we need to ask ourselves if the perception in our heads matches the reality on the ground. – I’m Larry Burriss.

Larry Burriss, a journalism professor, teaches introductory and media law courses. At the graduate level, he teaches quantitative research methods and media law. He is a graduate of The Ohio State University (BA in Broadcast Journalism, MA in Journalism), University of Oklahoma (MA in Human Relations), Ohio University (Ph.D. in Journalism ) and Concord Law School (JD). He has worked in print and broadcast media and public relations, and has published numerous articles in academic and popular publications. He has won first place in the Tennessee Associated Press Radio Contest nine times. Dr. Burriss’ publications and presentations include studies of presidential press conferences, NASA photographs, radio news, legal issues related to teens’ use of social networking sites, legal research, and the Earth middle.

Dr. Burriss has served as Director of the School of Journalism, Dean of the College of Mass Communication, and Chairman of the MTSU Faculty Senate. He was appointed by Governor Phil Bredesen to serve on the Tennessee Board of Regents. He was a lieutenant colonel in the US Air Force and served on active duty in Mali, Somalia, Bosnia, Central America, Europe and the Pentagon.