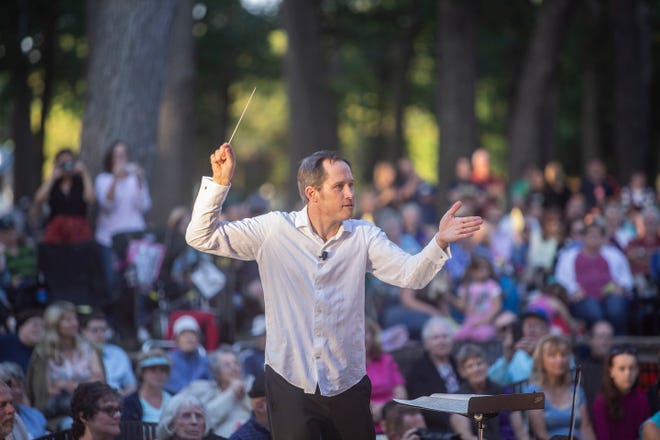 Without social distancing, the dance shoes would be the appropriate shoes for Saturday’s concert by the South Bend Symphony Orchestra.

The theme of the program, after all, is dance music.

â€œIt’s good to have a theme for a concert like this, and dancing is one of the best things for an occasion like this,â€ said SBSO Music Director Alastair Willis. â€œIt offers so much variety, as we’ll hear. â€¦ It’s really music that will make people smile.

Dance and dance music has definitely put a smile on Willis since childhood due to his mother’s career as a freelance dance critic for Dancing Times, Dance Magazine, Bachtrack.com and many other publications.

â€œShe learned Russian while we were there so she could translate for the Bolshoi and Kirov Ballet companies – then the best in the world,â€ he says, referring to the five years his family lived. in Moscow. “For decades, when they were on tour in London, she would go to see them and many dancers would come to visit us at our house.”

Then there is the physical aspect of the dance.

â€œDancing is a very athletic physical activity,â€ says Willis. “I still love sports and really enjoy the athleticism that comes with dancing.”

The orchestra won’t have dancers with it, but, said Willis, that’s okay.

â€œIt’s like music from a movie,â€ he says. â€œFilm music can be self-sufficient. The program we have chosen is dance music that can stand on its own.

The final concert of the Community Foundation of St. Joseph County’s Performing Arts Series in the Chris Wilson Pavilion in Potawatomi Park, the performance normally includes a community game portion with between 50 and 60 community members join the orchestra from the area below and in front of the stage.

This year, for security reasons, only two guest musicians will join the SBSO: Caio Gould on cello and Maya Kvaratskhelia on violin for “The Toreadors” by Bizet from “Carmen” and Tchaikovsky’s Waltz from “Sleeping Beauty” .

Both are members of the South Bend Youth Symphony and past winners of its annual concerto competition.

â€œWe didn’t feel comfortable bringing these musicians together in this little front-of-the-stage area,â€ said Laura Moran Walton, vice president of communications and public relations for the Community Foundation. “Instead, we are asking these two outstanding musicians from the South Bend Youth Symphony to replace the community at large this year.”

On the dance card

“There are a few pieces from French composers about Spain, and there is no better way to get to Spain than through a French composer,” Willis says of Bizet’s ‘Carmen’ work. and “Espana” by Chabrier.

â€œIt’s just a fantastic, virtuoso dance,â€ he says of the latter, which is based on the Spanish jota dance form.

The program also includes two of DvorÃ¡k’s Slavic dances, nos. 1 and 4 of the 16 he composed.

Most people, he said, should recognize Gliere’s “Russian Sailors’ Dance” when they hear it.

â€œIt’s just an amazing example of how a great songwriter can make the same melody interesting 12 times in a row,â€ says Willis. â€œHe does it using different instruments and all the colors of the orchestra. When I run thisâ€¦ I see the athleticism of Russian dancers. It is a demonstration piece.

A Walk, Alla Marcia from Sibelius from Karelia Suite, is also one of her mother’s favorite pieces.

â€œWhen you think of the Sibelius steps, they’re dark and brooding, but it’s a happy piece,â€ Willis says. “It’s such a celebratory piece and so full of joy, and I love it too.”

And that connects to happy memories for him.

â€œWhen we lived in Russia, one of the most popular getaways was to take the night train to Helsinki,â€ says Willis. “We’ve done it a few times, and I think that’s where my love of Scandinavia comes from.”

Since April, the SBSO has given four concerts at the Morris Performing Arts Center and three at Four Winds Field at Coveleski Stadium. Morris’s concerts included social distancing for musicians and the audience, who were also required to wear masks.

â€œThe outside is safer,â€ Willis says. â€œThe outdoors allows us to reach a larger audience because there is more space and more people can attend. It is a gesture of going out into our community as opposed to the community that comes to us at Morris. Hopefully the weather gods will cooperate.

But for anyone worried about the delta variant of the coronavirus and groundbreaking infections, for the first time in this gig’s 11-year history, they can stomp their feet at home.

The Community Foundation and SBSO teamed up with WVPE-FM (88.1) to simultaneously broadcast the concert live on Saturday, with special features planned for the intermission.

â€œIf you’re not ready to be in the crowd again, that’s okay,â€ says Moran Walton of the Community Foundation. â€œJust turn on your radio and enjoy it from your couch. â€¦ The series has always been free and accessible, and the simulcast on the radio makes it even more so.

It’s also a reminder, she says, that the series isn’t just about concerts.

And Willis, including the fifth season as musical director starts with a pair of gigs on September 25th and 26th, enjoy that.

â€œIt doesn’t change what I do and what we do, but it’s good to reach out to a larger audience,â€ Willis says. â€œI could say a sentence or two more between songs than I normally would. It’s going to be awesome. It’s always a pleasure to know that more people are listening.