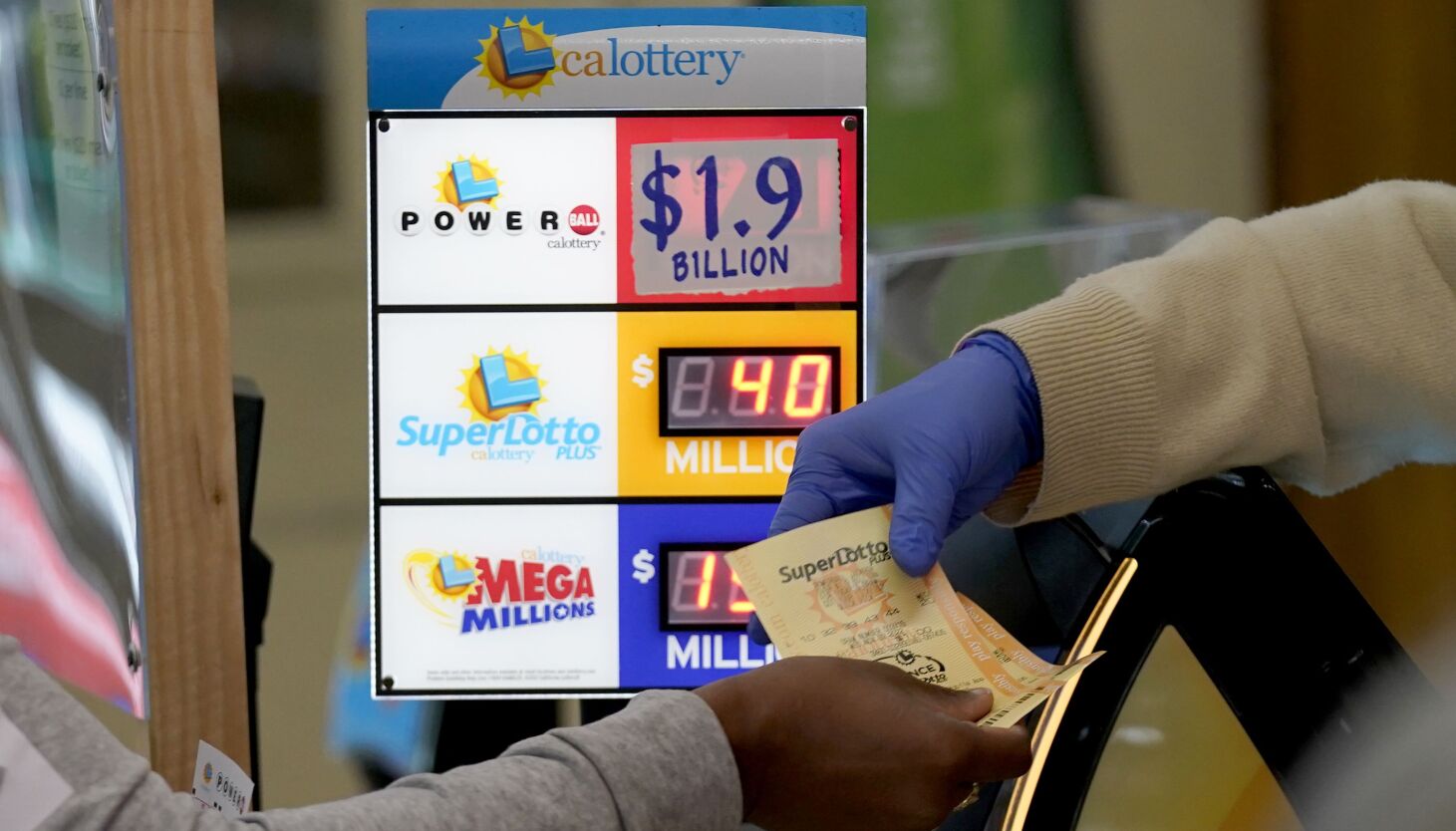 Did you win the Powerball jackpot?

If you live in Utah, this is a dumb question. Utah is one of five states not participating.

If you live in one of the 45 states that do, that’s still a dumb question.

Officials say a ticket sold in California won the jackpot which hit $2.04 billion on Tuesday, which the Wall Street Journal called the largest in the world. Still, I guess it’s not you.

You don’t have to be a genius to figure this out. You just need to understand the odds. In this case, your odds of picking five winning numbers between 1 and 69 and an extra number between 1 and 26, for the single red ball in the drawing, are approximately 1 in 292 million. This is according to the California Lottery website.

I could run through all the comparisons. The Centers for Disease Control and Prevention say your chances of being struck by lightning are less than 1 in a million, blah, blah, blah. But if you’re inclined to buy tickets to play at $2 a pop, the arguments probably won’t matter. You will fight back for fun, indulge in a harmless pastime that allows you to dream big, etc.

You also probably won’t consider what it means to have governments pushing you to gamble your hard-earned money. But you should.

Even if you consider gambling with your own money a personal right, you should be concerned about state governments, whose responsibility it is to protect the public welfare, urging you to do so. You should shy away from the clever and expensive television commercials that many states produce in an effort to lure citizens into gambling.

You should be moved by credible surveys that have found the poor and people of color to be the main targets of lotteries. You should be appalled to learn that a disproportionate amount of educational lottery proceeds go to wealthy colleges and school districts.

States, lured by lotteries for easy money, have become so addicted to gambling that they are in “an impossible moral bond”, according to an op-ed published this week by Bloomberg’s editorial board. “In no other situation would they so actively encourage citizens to engage in a costly and potentially addictive vice.”

Not only that, states don’t have to be honest with their advertising. You can search for it. Section 1307 of Title 18 of the United States Code specifically exempts state lotteries from laws requiring truth in advertising.

Les Bernal, the national director of an advocacy group called Stop Predatory Gambling, sums it all up in two succinct and powerful words: Scam and Fraud.

“The government used to run TV ads in the 1970s with John Wayne … and it said, ‘Invest in your country, buy American savings bonds,'” Bernal told the editorial boards of Deseret News/KSL on a recent visit.

“We took a nation of low earners, who could be small savers, and turned them into a nation of habitual bettors, as a government program.”

Bernal continued, “The reason most states have had laws for most of American history against marketed gambling is because it is a form of consumer financial fraud. He’s a big prick. It is a financial exchange that is mathematically stacked against you.

No one could seriously argue with the idea that the nation is awash in gambling, although the exact numbers are hard to pin down. Americans spent $71 billion on lotteries in 2017, the latest year for which official US census figures on the subject are available. Bloomberg editors put the figure at $95 billion last year.

A recent Bankrate.com survey found that people earning less than $30,000 spend 13% of their annual income on lottery tickets, while those earning more than $80,000 spend only 1%. It is, without a doubt, an income generator for the poor.

This has been convincingly demonstrated by a national survey conducted by the Howard Center for Investigative Journalism at the University of Maryland. Titled “Lottery on Your Block,” the survey found that “stores that sell tickets are disproportionately clustered in low-income communities in every state. In some states, these patterns also exist in black and Hispanic neighborhoods. . »

“What we’re talking about are gambling industry practices that are clearly designed to take advantage of vulnerable or adverse communities,” said Timothy Fong, co-director of the Gambling Studies Program at the University of California, Los Angeles, to NPR earlier this month. . “Why are you selling a potentially addictive product that we know is not generating wealth and income for anyone?”

The Howard Center also found that lotteries “disproportionately benefit” colleges and school districts with students significantly wealthier than residents of neighborhoods where lottery tickets are sold.

But no discussion of gambling today would be complete without delving into the explosion of sports betting, something so prevalent in game shows of all kinds that it can sometimes seem like the games have no other sponsors. And those ads are coming into the homes of Utahns who aren’t playing.

That wasn’t the case until 2018, when the US Supreme Court struck down the Professional and Amateur Sports Protection Act, allowing states to legalize betting on games.

“The expansion of sports betting is going to be faster than anything we’ve seen,” Geoff Freeman, president of the American Gaming Association, predicted at the time, according to a USA Today report.

We had no idea how true that would be.

Freeman perpetuated the fiction that a vast underground and illegal gambling network was at work prior to this decision, making the legal gambling movement appear virtuous. As author Stephen Marche wrote for The Atlantic a year ago, the truth is that “sports betting revenue grew 69% from 2019 to 2020 and another 270% in the first quarter of 2021 “.

Matthew Walther, editor of The Lamp, a Catholic literary journal, put it this way in a separate article for The Atlantic:

“Before online gambling was legalized, the vast majority of Americans would go their entire lives without the temptation to seek out a bookie or fly to the handful of jurisdictions in which in-person sports betting was permitted. What millions of people now face are endless misleading ads airing on America’s most-watched TV shows, urging them to risk their money on venture-backed rather than crime-funded platforms. organized.

Today, anyone with a smartphone can place a bet anywhere – at home, on public transport, lying in bed on an all-nighter, or watching their favorite team play.

I mentioned earlier the need to understand odds. It’s a safe bet that this marriage between sport and play will end badly.

As Marche said, “Play produces corruption as salt water produces rust.” You can fight him for a while, but he wins in the end.

He added: “Another fixation scandal will eventually rock American sports; it’s just a matter of time.”

Beyond the destruction of sports, the game destroys lives. Lotteries are primarily a regressive tax that cost the poor much more as a percentage of income than the rich. The poor often feel hopeless. A New York Sportsday survey found that 8% of Americans gambled in hopes of getting out of debt.

Even the National Responsible Gambling Center acknowledges that 6-9% of youth and young adults develop gambling problems, an alarming figure that is far higher than among adults.

The rate of gambling addiction among adults has been estimated at between 1% and 2% of the population. Gregg Doyel, sports columnist for the Indianapolis Star, calculates that this means that between 3.3 million and 6.6 million American adults currently have a gambling problem, “a number that will increase as it becomes more easier to place a bet”.

Each problem gambler translates into several family members and loved ones impacted by the behavior.

Bernal likes to portray Utah as the state where the American dream is most alive, and he cites the state’s decision to keep all forms of gambling illegal as the main reason. A few years ago, Harvard found that Utah had one of the highest rates of upward income mobility among children. Everyone who lives in the state should be grateful. It represents real economic hope, not the false promises of gambling.

In contrast, Bernal likens the act of commercial gambling to “pulling out a $100 bill, throwing it in the street, and then paying someone minimum wage to pick it up.”

“It’s just a sterile transfer of wealth where success only comes at someone else’s expense.”

Of course, someone probably won the Powerball jackpot. The winner, or winners, may be interviewed by the media, if they do not choose to remain anonymous. But no one ever interviews the millions upon millions who have come in and lost, week after week, and who will be driven to play again and again in the vain hope of quick financial success.

Chances are their state governments are playing them for suckers.