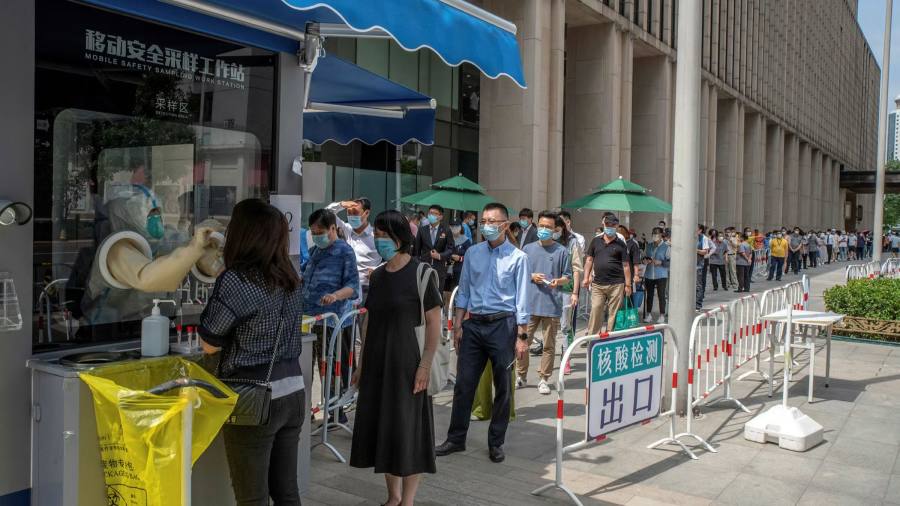 Hello. This article is an on-site version of our FirstFT newsletter. Sign up for our Asia, Europe/Africa or Americas edition to get it delivered straight to your inbox every weekday morning

Did you follow the news this week? Take our quiz.

China is building hundreds of thousands of permanent coronavirus testing facilities and expanding quarantine centers in several of its biggest cities as part of its zero Covid policy, despite the world’s most populous country’s economic and human toll .

Shanghai residents woke up yesterday to news that lockdown measures and mass testing would be carried out in Minhang district, home to more than 2 million people, for at least two days. The directive was issued just a week after President Xi Jinping’s administration declared victory in defending the city against the pandemic after a grueling two-month lockdown.

Severe restrictions in dozens of cities have brought the country to the brink of recession for only the second time in three decades. But even though measures have been eased in many areas, experts believe the government’s virus infrastructure program is designed to maintain mass testing and quarantine policies until 2023.

Yanzhong Huang, senior research fellow for global health at the Council for Foreign Relations think tank, said such measures demonstrate Beijing’s commitment to zero-Covid “despite this growing social and economic cost associated with this approach”.

“The government thinks it could outrun the virus. But we know that for the Omicron variant this is not realistic. And for an even more transmissible variant, that will make it even less feasible,” he said.

Share your comments on this newsletter by e-mail f[email protected]. Here’s the rest of the day’s news — Emily

The news of the war in Ukraine

Five other stories in the news

1. The ECB takes a hawkish turn to counter record inflation ECB President Christine Lagarde yesterday announced plans to raise interest rates above zero for the first time in a decade by September. The ECB surprised markets by signaling that it was likely to hike rates by half a percentage point in September, on top of a planned quarter-point hike in July – a bigger increase than expected. .

2. State Street thwarts Credit Suisse takeover rumors The US custodian bank denied it was in talks to acquire Credit Suisse, dismissing a report that it was suing the struggling Zurich-based lender. State Street on Wednesday initially declined to comment on a report by a Swiss blog that it was preparing an offer, exacerbating sharp moves in the shares of both lenders.

3. Apple goes in-house for loan service Apple is making its biggest move into finance by offering direct-to-consumer loans for its new “buy now, pay later” product, taking on a role in its other lending services from banking partners such as Goldman Sachs.

4. Works on local Chinese banks Thousands of desperate depositors in China have been battling for nearly two months to get their savings back after a bank run that raised concerns about the financial health of the country’s small lenders. Analysts said an economic downturn triggered by President Xi Jinping’s zero Covid policy is also making the problem worse.

5. Iran to remove 27 cameras from nuclear facilities Iran has warned the UN’s atomic watchdog that it is removing 27 cameras used to monitor nuclear activity from its facilities, in an escalation of the Islamic Republic’s standoff with the West.

Inflation figures China and the United States will release consumer price index data on Friday. US stocks and government bonds fell ahead of the release on Thursday. China will also announce the producer price index figures. See how your country compares to rising prices with our inflation tracker.

Philippine Independence Day The country will have a public holiday on Sunday to commemorate the country’s independence from Spain in 1898.

Join us June 16-17 for the FT Future of Finance, streaming live from the heart of The Next Web (TNW) tech festival. register here.

What else we read

Singapore’s wealthy seek luxury cars despite inflation The price of food, energy and other necessities is soaring globally. But in Singapore, the rich still want luxury cars. Residents of the city-state are paying the highest amount in decades just for the right to own a high-end car, official data showed Wednesday.

The global race for supercomputer power From climate change modeling to product development, machine capabilities are accelerating as the United States, China and Japan play on computing speed. China, in particular, has seen explosive growth in supercomputing since the late 2000s.

LME debacle raises serious questions for City of London This episode threatens to undermine the Square Mile’s claim to provide a level playing field, writes Gillian Tett. The LME reforms are sensible, if hopelessly overdue. But they may not be enough to restore confidence.

‘The product is dead. There are no more Spacs’ Rising interest rates, a weaker stock market and warnings of a regulatory crackdown fueled disillusionment with an earlier spree of special-purpose acquisitions. Now, with some banks taking a much more cautious approach, attention is starting to shift to what the future holds for the once-in-vogue asset class.

Who wants to own a hotel now? It’s still a dark time to be in hospitality after strict lockdowns and overseas travel bans reduced demand. But Sonesta, a little-known but fast-growing hotel company, thinks it has cracked the code for post-pandemic travel.

FT Weekend editor Alec Russell recently traveled to Athens to see 3,000 years of history – on a tight deadline: just three days. Here’s what was on his itinerary.

Thanks for reading and don’t forget you can add FirstFT to myFT. You can also choose to receive a FirstFT push notification every morning on the app. Send your recommendations and comments to [email protected] Register here.