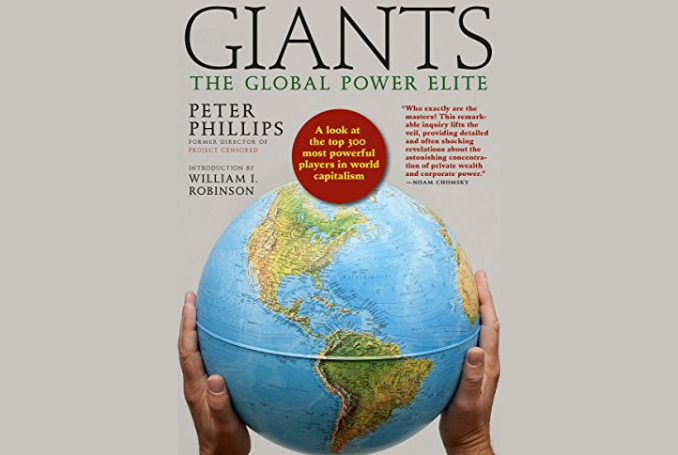 Abby Martin’s interview with Peter Phillips was the impetus for reading Peter Phillips’ now somewhat outdated but very valuable book, “Giants – The Global Power Elite”. The interview is valuable on its own and like all of Abby Martin’s work is concise and to the point; it’s a good place to start before reading the book itself. [1]

“Giants” is an examination of the few within the global transnational capitalist class [TNC] where eight people (at the time of publication) hold half the wealth and the top 1% hold 90% of the wealth. The seventeen biggest investment giants, made up of 199 people (remember, at publication) controlled $41 trillion, $50 trillion at the time of the interview, and who knows how much more now after all the injections money to support the Covid economy.

The most prominent NGO supporting all of this is the Atlantic Council, a group of security and investment advisers that issued political press releases followed by the corporate media who broadcast them as news, which is then taken over by other media, the CIA, and it becomes a circular reinforcement mechanism. There is “massive media penetration” of which 80% is pre-packaged by PR firms. Everything is armed for the empire.

The Council on Foreign Relations is a government advisory council with “a long history of American expansionism, with the aim of consolidating [sic] global hegemonic power” while paying “particular attention to international financial policies”.

This financial empire has its protectors. NATO, the US military, and many private security companies work around the world to serve the TNC. “Giants” refers to G4S as a major mercenary/security company working in many areas, including the protection of Israeli settlements, prisons and mercenary roles around the world. In 2021, it was acquired by Allied Services, continuing the same roles, with 800,000 employees, the largest private company in the world.

Beyond that, it simply becomes the role of the US military in all its parameters to keep the world “safe” for the financial actions of the NTC: “The US military empire has long been the protector of global capitalism…the permanent war as the economic release valve for excess capital is an essential part of understanding capitalism in today’s world.

More than just war, “failed states, fabricated civil wars, regime change, and outright invasions/occupations are manifestations of new world order demands for the protection of transnational capital.” The result is that “private wealth is used for economic colonization and privatization of public assets in complete disregard of human rights”. Yet arguably an equal amount of public wealth is used to support the TNC with huge influxes of government money for direct purchases of equipment and services as well as simply supporting businesses that would otherwise be in bankruptcy.

Phillips’ research is extensive, and while Abby Martin’s video provides an excellent summary, for the reader who wants specifics – and this is where the book comes to the fore – there are many lists and lists of the people involved and their company. and government relations.

Unfortunately, a very short “Letter to the Global Power Elite” puts a rather nasty spin on the subject. The letter begins with a glowing two-paragraph honorary tribute to the CNC ending: “you… the financial and political core of global capitalism… have the power… to save the world from murderous inequality and impending economic or environmental chaos.” Were they sarcastic in their congratulatory introduction?

It is this group that must be deconstructed, rendered powerless, if the global environment is to be reworked in all its aspects: political, financial, environmental and social with the elimination of a militarized corporate world. It is the very fear of this group that the US dollar will collapse and its power be lost, because it needs to be if the world is to have a chance to recover from its inequality.

– Jim Miles is a Canadian educator and a regular contributor/columnist of opinion pieces and book reviews for Palestine Chronicles. His interest in this topic stems originally from an environmental perspective, which encompasses the militarization and economic subjugation of the global community and its commodification through corporate governance and the US government.