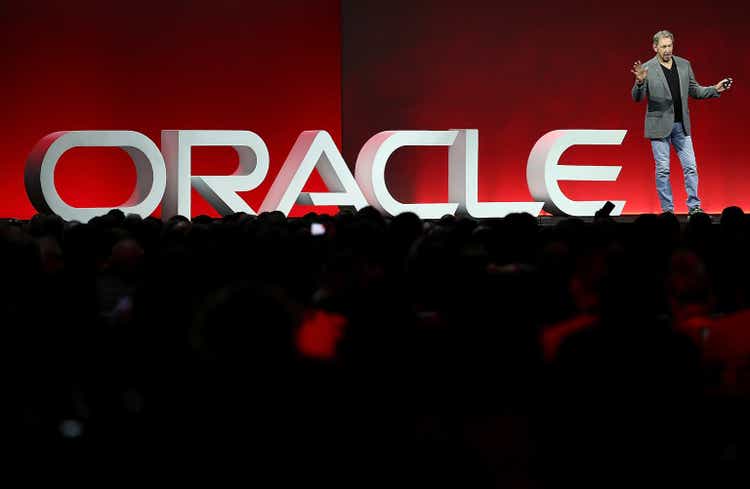 For a very long time Oracle (NYSE: ORCL) was seen as one of those traditional technology companies that failed to adapt to the rapidly changing world and experienced slow to declining revenue growth. About a year and a half ago, I presented my investment thesis in the company and explained why quality companies are not necessarily expensive.

At the time, Oracle was trading at around 13 times forward earnings and reported earnings per share just over $3.

Fast forward to today and the company now trades at 16x forward earnings and EPS estimates are well above what analysts expected just a year and a half ago.

While ORCL is trading around 26% below its all-time highs in December last year, the company has also proven to be a far superior investment to nearly all of its major peers. Since I first covered the company in October 2020, ORCL has generated a total return of 39%, outperforming the broader market and many of its major peers.

Companies such as Snowflake (SNOW), Salesforce (CRM), Amazon (AMZN), and SAP (SAP), which are among Oracle’s top competitors in the database, ERP, and cloud infrastructure space, have all had a negative return of between 3% and up to 35%.

While most retail and institutional investors continued to look back on Oracle’s weak revenue growth, the company proved them wrong and showed why tackling emotional bias is the most important step. important for obtaining higher yields. Right now the investment thesis for Oracle is much less attractive than it was a year and a half ago, but that doesn’t mean I’m considering selling my shares, quite the contrary.

The impact of rising interest rates

To measure momentum exposure, I use an index constructed by taking a long position in MTUM and a short position in VLUE. Oracle has a relatively weak relationship with this index with the six-month correlation of daily returns currently standing at 0.32.

By comparison, Salesforce exhibits a much stronger relationship with the momentum index and most of the time since the start of 2019, the 5-month rolling correlation has been in positive territory.

The reason this is so important is that high duration (momentum) stocks have benefited massively in recent years as monetary intervention has reached unprecedented levels. Extremely low yields and abundant liquidity have benefited companies positioned in the upper right corner of the chart below.

Therefore, if one is to believe that monetary policy will be normalized at least to some extent, then these are the companies most at risk. I explained how this process works in November last year in a thought piece titled “The Cloud Space by the Numbers: What Matters Most”.

Another thing Oracle shareholders need to keep in mind is that the company is now at an inflection point. What I mean by that is that for years the high growth segments of the business have been obscured by certain legacy businesses that have gone into secular decline.

As I explained earlier, Oracle has a significant competitive advantage by combining its leadership position in cloud ERP and database with its cloud infrastructure assets (more on this here and here). The company’s highly profitable business model is also very sticky with large enterprise customers.

That’s why the recent increase in revenue growth (see below) is encouraging as Oracle continues to solidify its competitive position in the cloud, while at the same time legacy revenue streams become less important.

Meanwhile, the Fusion and NetSuite ERP segments continue to grow at a staggering rate.

Fusion applications grew 29%, with mission-critical back-office applications now at $5.1 billion annualized revenue and growing 30%, including ERP mergerat the top 35%and HCM Fusionat the top 22%and NetSuite-ERPat the top 29%.

For example, since the first quarter of 2019, Oracle’s cloud services and license support revenue grew 15.6%, which has accelerated in recent quarters.

All of this makes it clear that Oracle is at an inflection point where the company would likely grow at a much faster rate than it has over the past decade. In addition to growth in the SaaS business, cloud infrastructure has recently been constrained in capacity and has not lagged Fusion ERP in terms of revenue growth.

And excluding legacy hosting services, infrastructure cloud services increased by more than 60%. And I expect the infrastructure revenue growth rate to increase over time.

As growth resumes, the strategy is about to change. In order to seize the opportunity of its strong competitive positioning and fully capitalize on growth opportunities, I expect Oracle’s management to become increasingly aggressive.

For starters, the capital expenditure to sales ratio has skyrocketed in recent quarters.

In addition to its organic growth, Oracle is also on track to complete one of its largest ever M&A transactions. Even though the Cerner deal is by no means small, Oracle’s growth strategy still revolves around organic growth which sets it apart from many of its peers.

Additionally, unlike many of its peers, Oracle does not issue stock on an annual basis to fund its M&A activity and equity compensation programs. Indeed, the company has significantly strengthened its share buyback program in recent years.

It should be noted that all of this has also led to a sharp increase in net debt levels (see below). However, they remain manageable within Oracle’s profitability framework.

Finally, stock-based compensation as a share of sales has also increased as a tool to provide additional incentives to employees.

In a nutshell, financial risk at Oracle has increased in recent years as the company has become increasingly aggressive in its growth strategy. However, with this higher risk comes a very high reward, if Oracle sticks to its current strategy which involves significant organic growth, integrating Cerner and reducing shares outstanding. On the one hand, this has the potential for significant multiple repricing for Oracle and on the other, the company will consolidate its existing competitive advantages.