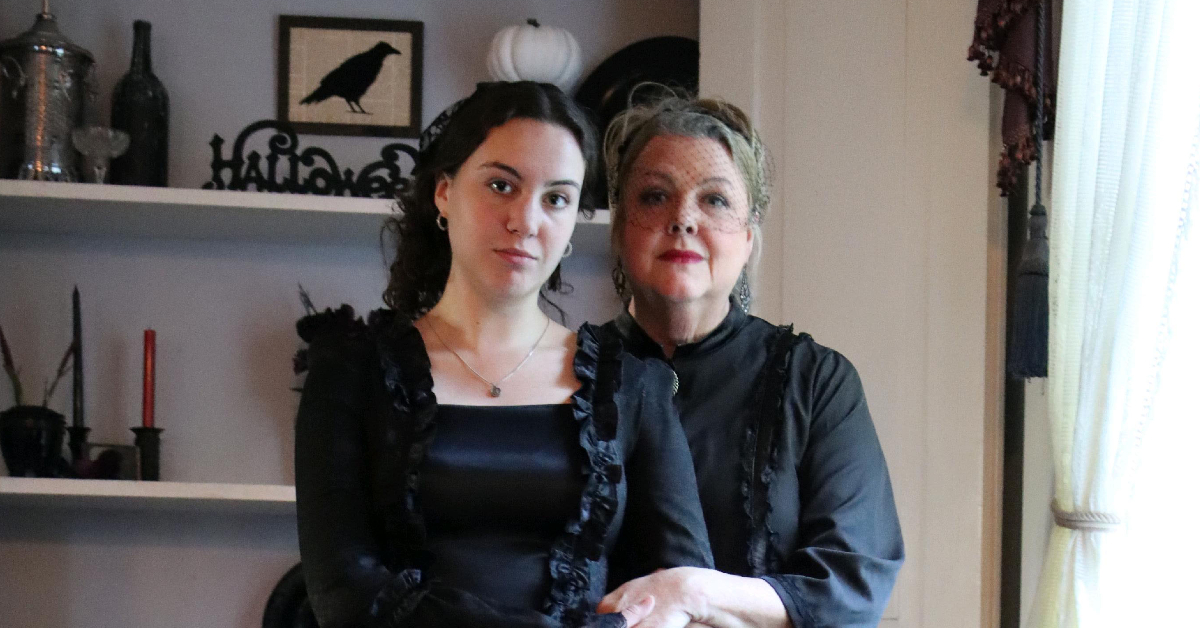 OUTLOOK: Visit the most haunted house in Mississippi by candlelight

Erica Roberts, left, and Melanie Roberts pose for photos at McRaven. Mother and daughter are part of the candlelight tours offered in October. (Photo submitted)

Nestled behind layers of lush greenery is the McRaven House.

Built in three different eras, the Vicksburg house has been dubbed the most haunted house in Mississippi. But don’t trust anyone else about the paranormal activities that dwell within. Plan a visit during the next Candlelight Tours offered in October and find out what happens in a real haunted house.

Michael Walker, who is one of the tour guides at the historic house, said all of the tours presented at McRaven have an air of mystery and intrigue, but the Candlelight Tours also offer a bit of a scare – while carrying the visitors over time.

Dressed in period clothing and telling their character’s story in first person, Walker said, the guides assume the roles of the house’s former owners, and visitors will learn about their struggles.

“The first thing you can expect (when you enter the house) is that you will be taken to a funeral,” Walker said. “You will be greeted by Miss Ellen, and she will tell you all about her dear deceased brother.”

The tour will continue through the house where visitors will not only hear the stories of those who have inhabited the residence; they will also be encapsulated by the spirits that roam the place.

Walker said he portrays Andrew Glass, who is credited with building the first part of the house, which was built in 1797 – before Mississippi became a state.

Glass was a bandit who terrorized those who traveled along the Natchez Trace.

The part of the house he built, Walker said, is a simple two-room brick structure with the bedroom built above the kitchen. This allowed Glass to be somewhat protected from those seeking revenge for his thieving lifestyle. Glass had a removable ladder up to the bedroom to protect him from an ambush while he slept.

Walker said one of the home’s most notable residents was Mary Elizabeth Howard.

During the candlelight tours, visitors will have the opportunity, he said, to hear the story of how she died inside the house during childbirth.

Howard’s husband, Sheriff Stephen Howard, added the second part of McRaven in 1836. This part of the house is built in the Empire period, which is described as simple, but with decorative touches.

Walker said the tour ends in the master bedroom of John Bobb, who built the third part of the house.

“He (Bobb) lived here during the siege and was the first civilian casualty in Vicksburg during the occupation,” Walker said.

The third section of the house was built in the Greek Revival style and in addition to Bobb’s master bedroom, it features a men’s locker room, living room, and a flying wing staircase.

Bobb eventually remodeled the exterior of the house. It now has an Italianate facade with “Vicksburg pillars”.

Walker said that as a guide he enjoys being part of the candlelight tours.

“I think it’s a lot more fun. It’s Halloween so we’re going to have gimmicks and scares for everyone,” he said, adding that visitors will also be “swept away” in the story because it will become “a little more alive”.

Terri Frazier was born in Cleveland. Soon after, the family moved to Vicksburg. She is a part-time reporter for the Vicksburg Post and editor of Vicksburg Living Magazine, which was awarded first place by the Mississippi Press Association. She was also the recipient of a first place award in the editorial division of the MPA’s Better Newspaper Contest for “Best Feature Article“.

Terri is a graduate of Warren Central High School and Mississippi State University, where she earned a bachelor’s degree in communications with a major in public relations.

Before coming to work at the Post just over 10 years ago, she freelanced at the Jackson Free Press. But for most of her life, she enjoyed being a full-time stay-at-home mom.

Terri is a member of Crawford Street United Methodist Church. She is a life member of the Vicksburg Junior Auxiliary and was a member of the Sampler Antique Club and the Town and Country Garden Club. She is married to Dr. Walter Frazier.

“Whether it’s staying informed about local government issues or hearing the stories of local residents, a local newspaper is vital to a community. I have felt privileged to be part of a dedicated team at the Post throughout my tenure and hope that with theirs and with local support, I can continue to grow and hone my skills by helping to share the stories in Vicksburg. When people ask me what I love most about my job, my answer is always “the people”.