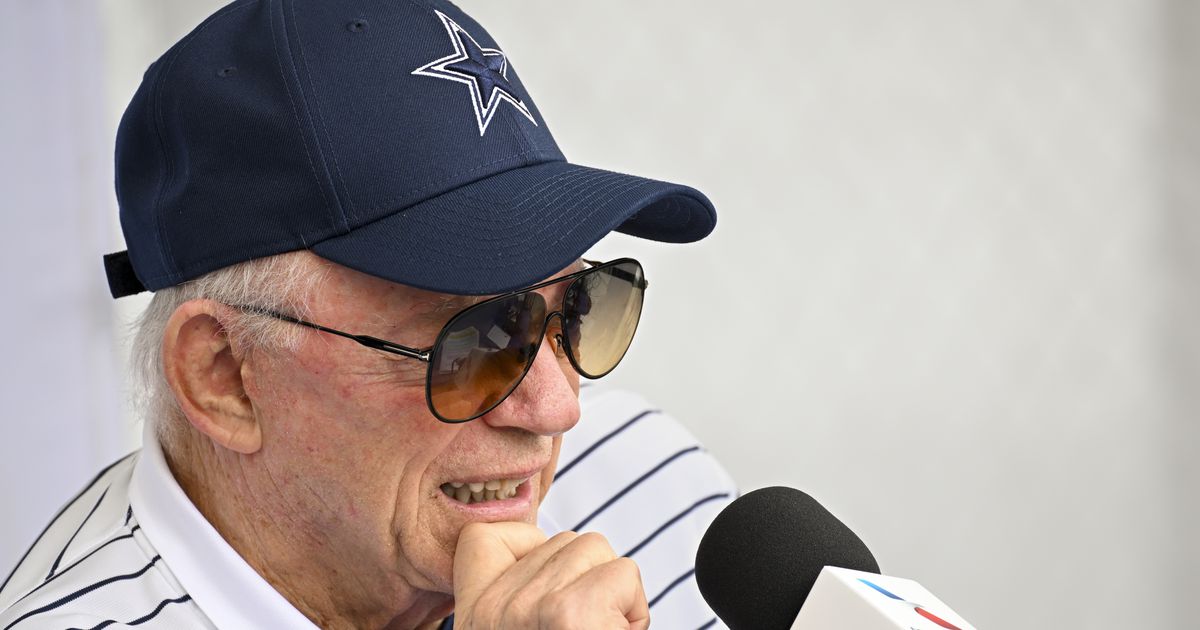 OXNARD, Calif. — Jerry Jones took the media and fans on a dazzling off-road tour of his beautiful mind during the Cowboys’ training camp opening press conference.

The franchise patriarch spoke about his head coach, the concept of “half-ass availability” and compared himself to a former Cowboys running back who is running as a Senate candidate in Georgia. Jones reflected on the team’s successes and failures since their last Super Bowl title, telling a reporter who respectfully asked him to quote those successes, “I appreciate your tenderness.”

Jones became emotional and wept as he recalled the death of one of his closest associates. He joked about the loss of another dear friend using an outdated and pejorative term, for which he apologized later that day.

Oh, and by the way. Do you remember that car accident a few months ago when a driver rolled over in the car Jones was driving, sending the Cowboys owner to the hospital as a precaution?

This person is suing Jones.

It was entertainment — and sometimes cringe-worthy — adventure. But the two big takeaways from Tuesday’s opener were his endorsement of head coach Mike McCarthy and his assessment of this team.

“I think we’re in better shape today to take a chance than when we were sitting here this time last year,” Jones said, referring to the 12-5 side that lost in the game. round of wild cards against San Francisco. “And I say that following what I said just before that. I thought last year we had a chance to race.

“I think we’re in better shape.”

Jones opened the proceedings with an eight-minute preamble, scanning the papers in front of him, “to make sure I haven’t missed my choice of remarks”, laughing that he hadn’t spoken in a while and had a lot tidy.

“It’s probably the one that touches me the most, and it’s Mike and him coaching,” Jones said. “I want to be very clear. He wouldn’t be sitting here today if I didn’t think he was the man to lead this team to a Super Bowl. He wouldn’t.

“And I have choices. It’s not meant to be insensitive to anyone, it’s a fact. You write about many of these choices and they were there for my use if I wanted them. And no.

“The guy to my right is the guy I was convicted of and been for.”

Receiver Amari Cooper, right tackle La’el Collins and defensive end Randy Gregory were never mentioned by name when Jones talked about leaving key players this offseason. But he explained that a team cannot have ‘half-zero availability’ and suggested that if those players’ salaries were 10% to 15% lower the club would have viewed their departure differently.

“Availability had everything to do with it,” said Jones, who emphasized that he didn’t want to put anyone down. “I’m not trying to speak in Pig Latin. I try to speak frankly.”

When asked if this has been the toughest off-season from a personal perspective since buying the club 33 years ago, Jones compared himself to Herschel Walker. — the former football player, not the current Georgia senatorial candidate who made a series of controversial and questionable remarks.

“It’s almost like you feel like Herschel Walker running and they’re bouncing,” Jones said of the family drama and the departure of longtime vice president of public relations Rich Dalrymple who swirled around him over the course of of the last six months.

Jones broke down remembering the loss of Marylyn Love, the trusted executive assistant who stood by his side for nearly 43 years.

“I’m sure you’ve all had personal problems. But this is my first training camp I’ve ever been where Marylyn wasn’t [here].”

Even after his retirement, Lacewell would come to training camp for about a week to observe practice and hold ground. Lacewell was not a tall man. Jones, who enjoyed his banter with Lacewell immensely, joked, “I’m going to find someone, a m—–, to stand there with me and dress her up like Lace.

“You know, we all need our props.”

The M word is considered an insult. Hours later, Jones released this statement through the PR department:

“Earlier today I made a reference which I understand may have been considered offensive. I apologize.

Several months ago, Jones was behind the wheel when the driver of a car next to him pulled into his lane and reverse engineered his car. Both shins were scraped off and he went to hospital briefly for observation due to a knot on his head.

He said he felt fine and there were no lingering issues in the episode. Well, there is.