The RCEP agreement creates a free trade agreement between ASEAN and the countries of Asia-Pacific, offering new trade opportunities through tariff reductions, new rules of origin and trade facilitation measures. 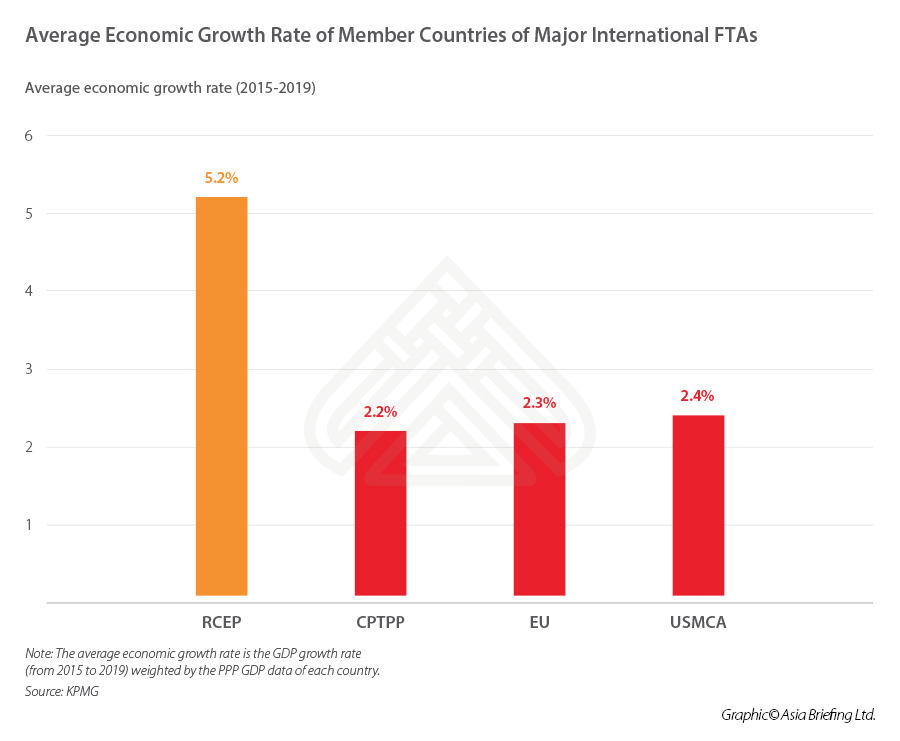 Once ratified by at least six ASEAN countries and three non-ASEAN countries, or the equivalent of three-fifths of all signatories, the RCEP agreement will enter into force in 60 days. Analysts expect this to happen in the second half of 2021 or early 2022.

How important is the RCEP agreement?

Despite the sheer size of RCEP, opinions vary as to its real importance. In fact, before RCEP, most of its member countries already had existing bilateral FTAs â€‹â€‹- according to The Economist, of the 2.3 trillion goods moving between RCEP signatories in 2019, 83% passed between those who already have a trade deal.

Nonetheless, the RCEP agreement is the first FTA between China and Japan, Japan and South Korea, and Japan and Australia. This agreement should lead to the long-awaited trilateral FTA between these countries; the China-Japan-South Korea FTA has been in negotiation for as long as the RCEP.

In terms of content, the RCEP agreement combines various FTAs â€‹â€‹between ASEAN countries and other Asia-Pacific countries in a comprehensive compact framework.

Composed of 20 chapters and four market access calendars, the RCEP Agreement covers typical provisions on trade in goods, trade in services, rule of origin (ROO), customs procedures and trade facilitation. Beyond that, it also contains provisions that are less common in FTAs, such as provisions on small and medium-sized enterprises (SMEs), e-commerce, competition policy and government procurement.

However, the RCEP is seen as less revolutionary than the Comprehensive Trans-Pacific Partnership (CPTPP) agreement, as it lacks environmental and labor standards provisions and rules for state-owned enterprises (SOE). On the contrary, RCEP focuses more on tariff reduction and trade facilitation measures.

What are the strengths of the RCEP agreement?

Summary of the main provisions 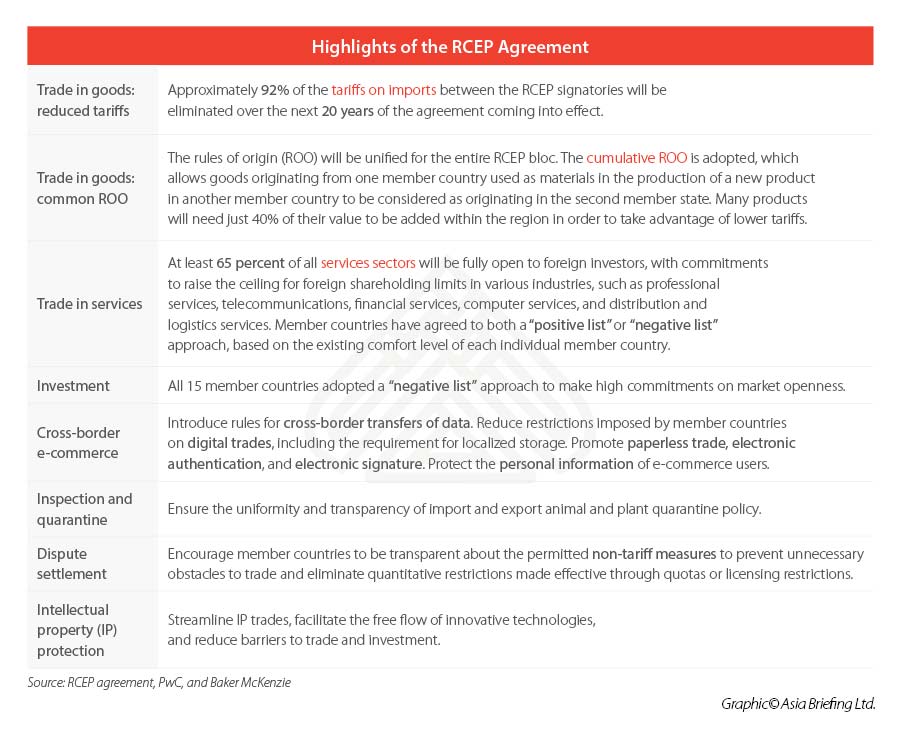 Elimination and reduction of tariffs

It is estimated that the RCEP deal will eventually eliminate tariffs on more than 90% of goods traded within the bloc over the next two decades.

Within the framework of the RCEP, each member country defines its List of tariff commitments. Based on Schedule, tariffs on specific products imported from other RCEP members can be abolished immediately once the agreement enters into force or be phased out over a transition period of around 20 years. 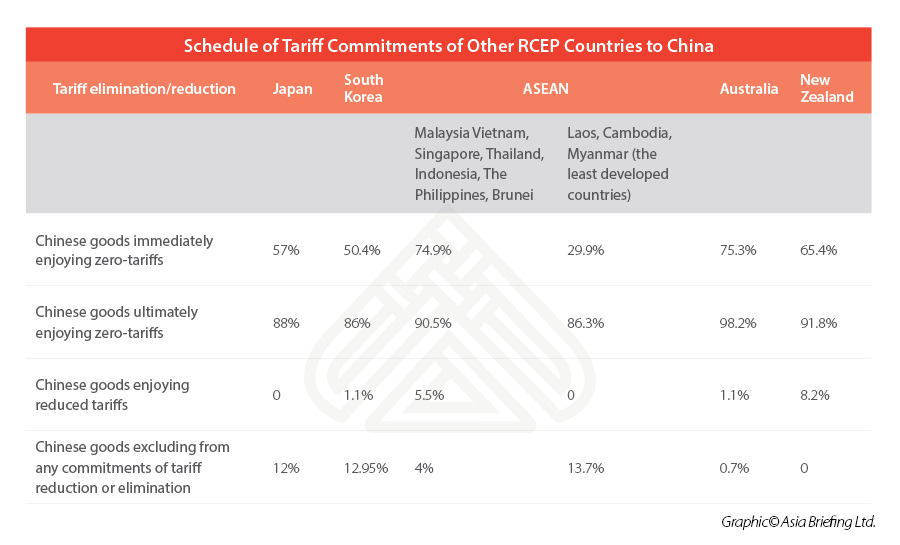 To better understand this economic map, members could be grouped into four types of economies: exporters of high-tech or high-end products (Japan and South Korea), exporters of industrial raw materials and consumer goods ( Australia and New Zealand), transformative and entrepreneurial-driven economies (major ASEAN countries such as Singapore and Malaysia), and the manufacturing and consumer economy (China). 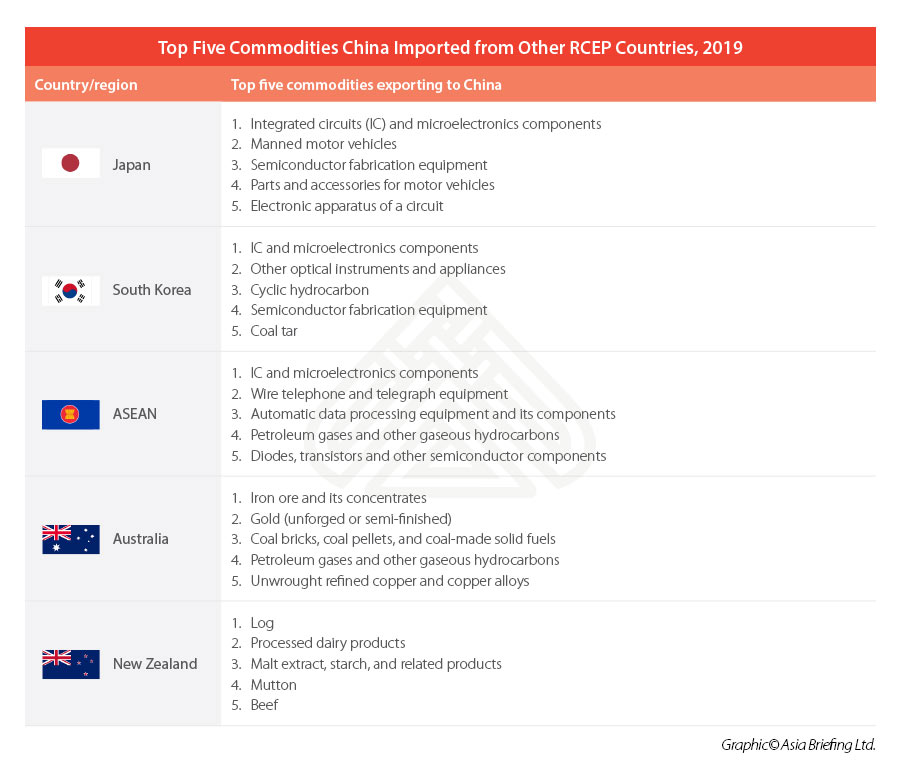 Due to the diverse economic and industrial structures of RCEP economies, the agreement is expected to have important implications for the expansion and deepening of intraregional supply and value chains.

As the first FTA involving Japan, China and South Korea, RCEP will enable extensive supply chain interaction between the three countries, especially in the electronics industry, where Japan and South Korea occupy the high-end technological links of certain chains of the electronics industry. For example, in advanced display technology and industry, precision manufacturing equipment ‘evaporators’ and its main raw materials are almost monopolized by Japanese companies, while South Korea holds many related patents. to the manufacture of OLED (Organic Light Emitting Diode) screens. China, although it has stepped up its R&D efforts, remains dependent on imports from Japan and South Korea. As China grows as the main consumer economy in the Asian region, the Japanese auto industry is also expected to benefit from Chinese household vehicle demand.

ASEAN economies will be in a unique position to serve China’s growing domestic economy with value-added consumer and intermediate products. Singapore will mainly benefit from the growth in China’s supply of chemicals and petroleum products. Vietnam will focus more on electronics and machinery. RCEP’s low-income economies will also benefit from the significant shift of the textile and clothing industries out of China to their lower cost bases.

China Briefing is written and produced by Dezan Shira and associates. The practice assists foreign investors in China and has done so since 1992 through offices in Beijing, Tianjin, Dalian, Qingdao, Shanghai, Hangzhou, Ningbo, Suzhou, Guangzhou, Dongguan, Zhongshan, Shenzhen, and Hong Kong. Please contact the firm for assistance in China at [email protected].

Dezan Shira & Associates has offices in Vietnam, Indonesia, Singapore, United States, Germany, Italy, India, and Russia, in addition to our commercial research facilities along the Belt and Road Initiative. We also have partner companies that help foreign investors to The Philippines, Malaysia, Thailand, Bangladesh.