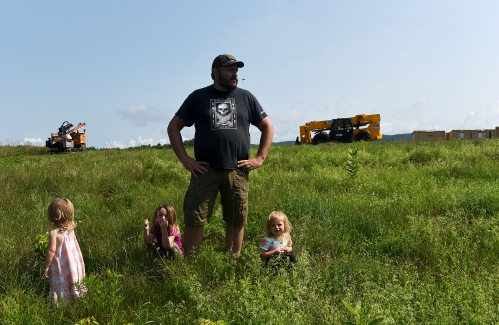 His interest in energy efficiency stems, in part, from his more than 20 years of experience in a Woodstock pharmacy.

While Rogers was designing his house, the team at Vermod, the company that built his house, told him about the White River Community Solar project. South Royalton-based nonprofit Building A Local Economy and the Vermont Law School Energy Clinic have been working together to launch the project since 2015. This summer, Catamount Solar begins construction of the solar panel at Putting Down Roots Farm.

At the end of August, the 23 families and a small business participating in the project will save on their utility bills. Energy Clinic director Kevin Jones estimates that participants’ initial investment of $ 3,061 per kilowatt should pay off in less than twelve years. With a 26% investment tax credit, participants could get their capital back faster.

Normally, renters, homeowners with a shaded property, or middle-income residents struggle to find ways to offset their utility bills with solar power because they can’t easily install roof panels. Project supporters argue that community solar power saves participants money through an economy of scale model that lowers the price of the initial investment.

Unlike most solar projects, Jones said this community solar model allows participants to hold “renewable energy credits.” RECs are typically sold to the utility company in order to help the state meet its renewable energy goals. Because Vermont views hydropower as renewable, Green Mountain Power often sells solar and wind credits to utilities in other states and replaces them with cheaper hydropower credits at a profit. The company argues that this model helps to keep monthly customer bills low.

“Participants can say they get their electricity from solar power, and you can’t claim that if you sell your RECs. It’s that simple, ”said Chris Wood, Managing Director of BALE.

Jeff Robertson, who runs his mother’s Locust Creek Country Store in Bethel, joined the solar project two years ago to eliminate a major operating expense and for the sake of the environment. He knew he wouldn’t be able to install enough solar panels on the roof to cover the store’s utilities, and so a community solar project was the perfect fit. He said he was interested in buying into a future BALE community solar project when the store installs a heat pump that will drive up the electricity bill.

“I would have preferred that they sold the RECs,” he said. “We have no intention of pretending where our power comes from. I have the personal satisfaction of knowing that our power is compensated. It makes no sense not to take advantage of all the incentives to invest in solar energy.

The 150-kilowatt system will occupy approximately one acre of sloping land on Russell Lewczuk-Jensen’s farm. Some residents called him because they feared he would cede prime farmland, but Lewczuk-Jensen said it was too dangerous to drive a tractor up the steep slope. He pointed out that the site is only visible from a short stretch of Royalton Hill Road. He plans to minimize mowing by grazing his meat birds between the panels.

“If you make the right choices about where solar power is, it’s as important as the food,” he said. “We need electricity for agriculture.

The White River Solar Project pays him a one-time royalty to use the land for the next 25 years. He said he would immediately use the money to install his own solar panels to supply the farm with renewable energy.

“Paying for solar will eliminate our electricity bill. Electricity is the only thing we get from the grid, ”he said. “We will take another step towards sustainability. ”

Lewczuk-Jensen first accepted the project about six years ago. Most solar panels don’t take that long to go from planning to implementation, but project organizers said they encountered a series of regulatory hurdles that repeatedly delayed the project.

“A great idea ran up against the rules,” Jones said. When the project was submitted for approval, Green Mountain Power had already hit its 15% cap on net metering, a program where owners of solar panels are credited for the energy they add to the grid.

Under the 2017 Public Utilities Commission regulations, owners of solar panels that keep RECs would receive 4 cents less per kwh of GMP than other net metering participants. Jones called the lower rate a “life penalty.”

The Vermont Public Service Board argued in 2017 that net metering customers who transfer RECs to the utility “support meeting Vermont renewable energy standards” and “should be compensated at a higher rate because they have waived to personal benefits to support a good of public policy. . ”

Jones has repeatedly testified before the Legislature and the PUC to advocate for more favorable rules for net metering clients who wish to retain RECs. He argued that the rule undermined Vermont’s legislative targets to cut emissions.

“It’s troubling that this discourages local projects that want to keep renewables and carbon reductions in the state,” he said.

Unable to change the regulations, Jones and Wood worked together to create a replicable model that would protect participants from the financial risks of the community solar project authorization process. Jones said it was so complex it cost around $ 30,000. Even when sharing the costs, few low- and middle-income people can afford to invest thousands of dollars in a planned solar panel when there is a risk that the project will be turned down. Thus, VLS and BALE have collaborated to create a new model of community solar projects that isolates participants from this risk. The Energy Clinic provided approximately $ 15,000 in pro bono legal work, which also gave students hands-on experience navigating the state’s energy laws.

Jones and Wood successfully applied to the Vermont State Employees Credit Union donation committee for a $ 15,000 “feed capital fund” to pay for the other half of the authorization process.

“I hope that after a few successful projects it could be replicated and it could grow so that there would be enough to do three or four projects simultaneously, not just one at a time,” said Laurie Fielder, director of VGreen credit union. program.

The fund will continue to fund community-owned solar projects in the area, and Jones is already in discussions with the Strafford Energy Committee about locating another community solar project there.

Rogers, the White River Junction resident moving into the new home, said she has more plans to get closer to net zero in other parts of her life. She’s hoping to buy a battery-powered lawn mower and has said her next car will be a hybrid.

“Anyone can do a little bit, and it will add up,” said Rogers.