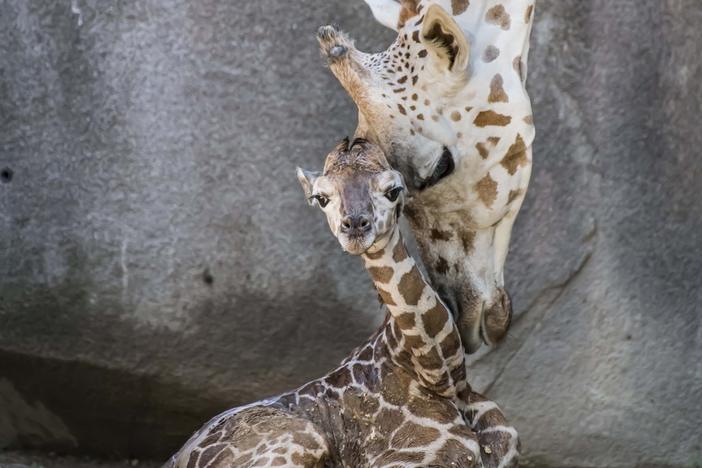 Visitors to the Milwaukee County Zoo witnessed an event that hadn’t happened in front of a crowd since the 1990s; the birth of a baby giraffe.

Witnesses were able to see mother Ziggy give birth to a male reticulated giraffe on August 4.

Animal care staff received a call around 11:40 a.m. that day saying that Ziggy was going to give birth while in her outdoor habitat. Staff quickly rushed to the exhibit where Ziggy gave birth to a baby male giraffe at 12:20 p.m.; at 1:40 p.m. the calf was up and walking, said Jennifer Diliberti-Shea, media relations coordinator for the Milwaukee County Zoo.

“It all happened so fast,” Diliberti-Shea told NPR over the phone. “Witnessing a moment like this can be out of the ordinary depending on the animal. We’ve had camels that were born with the visitors there. Giraffes, not so much. We think the last – and our curator wasn’t there at the time so we don’t have an exact date – it was in the 1990s. So it’s not a common occurrence.”

The zoo has been in the midst of a baby boom since the spring. The new additions include a harbor seal and two macaques, Diliberti-Shea said. In June, there was also the birth of another giraffe named Poppy.

The unnamed calf is currently doing well under the watchful eye of his mother Ziggy.

“I think there were some, you know, people who were maybe surprised, I guess it happened in the exhibition and I think it maybe left people a little bit unsettled “, Diliberti-Shea said. “And it really shouldn’t. Because we have all the animal care people there, we have vets on staff. So, you know, as soon as they got the call that this birth was taking place, they rushed in. And it was just a matter of trying to get the mother into some kind of more private space, but she didn’t seem too shocked or too upset by it. ”

“We just want to assure all of our visitors that this little guy is doing really, really well and breastfeeding,” added Diliberti-Shea.